Inflation, deflation – what’s in a name?

Inflation, deflation – what’s in a name?

When the inflation rate fell into negative territory in the June quarter, it was so unusual it begged the question of what this means for the economy. Are we facing deflation or even stagflation and what is the difference? 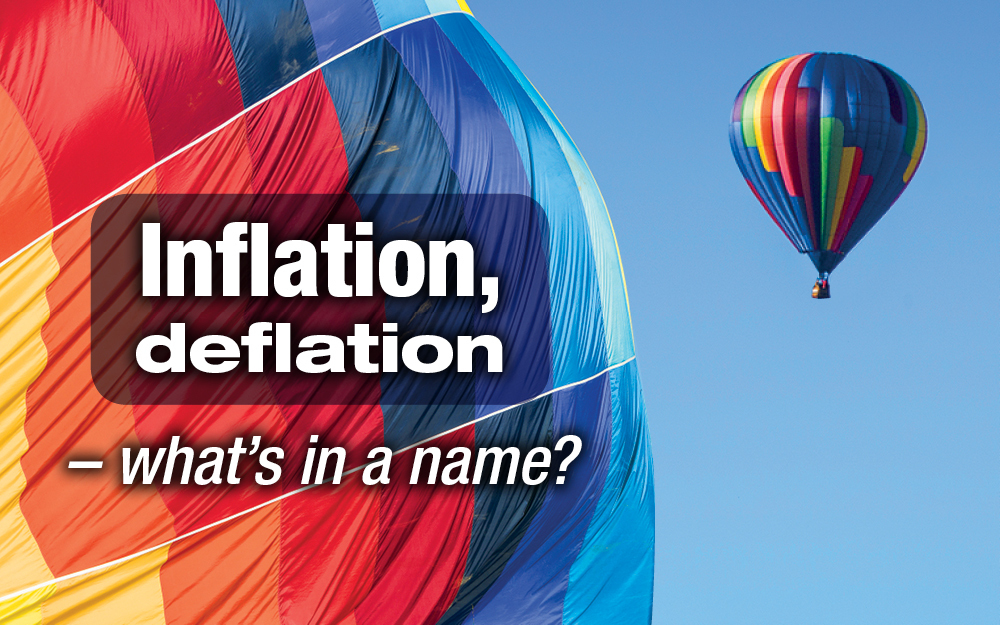 In the June quarter the annual inflation rate fell to minus 0.3 per cent, only the third time in 72 years of record keeping that the rate has been in the negative.

Much of the fall was attributed to free childcare (part of the special COVID-19 measures) and low petroleum prices during the quarter. The general view is that the September quarter will return to positive territory when childcare fees resume.

So what is inflation and why does it matter?

In Australia, the main measure of inflation is the consumer price index (CPI). This measures the rate of change in the average price of a basket of selected goods and services over time.

While the index can move up and down, a negative inflation rate – no, that’s not an oxymoron – is referred to as deflation.

Generally, the Reserve Bank of Australia (RBA) aims to keep the inflation rate between 2 and 3 per cent. But in the current environment, the RBA is now expecting the CPI to remain below 2 per cent until at least December 2022.

A falling consumer price index – particularly one that is in negative territory – sounds like it should be a good thing as it will give you greater purchasing power with the lower prices. After all, who doesn’t like a bargain? But in reality, it can play havoc with retail businesses who are faced with lower profits but not necessarily lower costs. This can put a squeeze on their business, which can often lead to retrenchments and a spike in unemployment.

The other two occasions when Australia experienced deflation were in 1962 and in 1997-98.

The 1962 negative rate was after then Prime Minister Menzies implemented two credit squeezes to end the inflation caused by the Korean War Boom. The 1997 episode was in the wake of the Asian Financial crisis.

Clearly, we are living in extraordinary times with COVID-19 and until the pandemic is more under control we can expect further slowing in the economy.

But at least this curtailment of economic activity is not coinciding with higher prices for goods. If that were the case, the country would be faced with stagflation which poses a far greater squeeze on households than deflation. Stagflation is a situation with rising inflation (prices) and slowing economic growth, often accompanied with high unemployment.

Of course, if your job is not in jeopardy, you will benefit from cheaper goods. But if lower prices become the norm, people may hold off major purchases on the expectation that they can buy even more cheaply in the future. This is not good news as consumer spending makes up 60 per cent of total economic activity, so a contraction in spending generally results in a contraction in the economy.

However, if your employment is insecure and the overall unemployment rate rises, this will depress household spending. It will also have an impact on the property market.

According to the latest figures, more than one million Australians are currently unemployed and many more could face uncertainty going forward. Whether you rent or are buying your property, finding the funds can present problems.

In some areas, as demand dried up in the June quarter, rents dropped by as much as 25 per cent. This may be good for renters, but it is not for those with investment property as part of their retirement strategy. If rents fall – or indeed if your property is vacant for some time – it may jeopardise retirement income.

Property prices are also under attack with distressed sales coming to the fore as the unemployment rate grows. When property values fall, mortgages become more expensive in real terms as your equity may be reduced – and in some cases you could find yourself with negative equity in your property.

Hopefully, the measures introduced in Australia to counter COVID-19 will prove successful and the economy will begin to recover.

If you would like to discuss your overall investment strategy in light of these challenging times, then please call.